What is the Guild?

The Guild is a poorly defined monstrous bundle of contradiction and trouble. If we want to fix it we need to go back to square one and be clear about what it actually is (without being overly academic).

Tonight is the final Guild Council of the year and like every Council meeting before it, nearly all the debates we have will be within the framework of the “Guild”. What should the Guild of Students be doing? Of course to answer that we need to know what the Guild is.

This is partly in response to James Laurenson’s article: “So what’s it all about then?”… What is “the guild”? A great debate to start to which this is my contribution – which is obviously horribly biased. However, feel free to write your own version and I’ll link to it alongside this article.

James is on the money on the lack of independence from the university; however, I think he fails to actually define what this university dependent organisation is. Firstly we need a framework within which we can envisage the Guild, what it is and what it could be.

Obviously the Guild of Students means different things to different people. James’ framework is essentially that the Guild is there to  “prioritise Student Welfare”, however, this he divides into two camps:

“the group of people who prioritise what I term ‘physical’ welfare; Library Fines, Student Group support, Book Fairs, that kind of thing.  Then there’s the group of conceive of welfare in terms of ‘causes’; the Liberation groups, Fees and Cuts, Reclaim the Guild, and the never-dying Israel/Palestine debaters.”.

This analogy is limited, I’ll explain why later. However, for now I think I can put it a bit better than “causes Vs physical welfare”. Firstly what James calls “causes”: liberation, cuts, tuition fees, are just as much the “physical welfare” of the student body as library fines, student group support and book fairs . The divide between what he calls “causes” or in his view the more ideological elements of the union and the practical local issues is better summed up as being part of a classic “General vs Sector unionism divide”.

A General vs a Sector union

One scale, within which we might try and define what the Guild is, is along the spectrum between General unionism & Trade or Industrial unionism.

We have a union to look after our welfare and needs but to what extent should it act? Is the student union only there to deal with student welfare issues within the university? Perhaps it should look to the needs of students within the education system, maybe it is there to look after our needs within society as a whole?

You can draw this out even further, to look after student welfare in wider society dealing with issues not directly related to the higher education system. Why shouldn’t the union attempt to tackle issues that hurt student welfare indirectly, like racism or sexism? If we are going to tackle wider issues shouldn’t we link up with other groups in other unions and fight for a better society? If we are going to work across sectors for better welfare for everyone then we may as well also work across such borders? Right?

I’ve done a little diagram below to express the divide:

Of course this is a simplification of one divide in student unionism but generally holds a degree of applicability. One Russell group Student Union on the extreme end of the scale, Imperial College London, backed the tuition fee cap rising because “their” students were rich enough to afford the fees and it would mean “their” university would be able to afford to provide them with more services with extra fees that they could afford to pay. This is a clear example of sector unionism. While someone with a more generalist union out-look would argue that our Unions should be against tuition fees regardless of the ability of the students in our university to pay as for the 7 million student body as a whole it is bad thing. 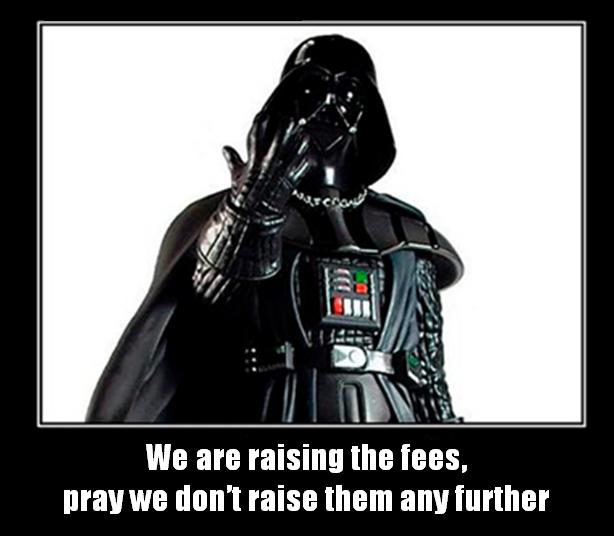 On the opposite end of the scale we have in the past decided to reach out and fight for all rather than just ourselves. In 1983 student unions not only successfully waged a massive campaign to defeat the Thatcher government’s attempt to introduce tuition fees, but they also argued for free education for international students and secured an additional £46m for international students in grants. Later in 1987 the NUS’ ‘Boerclaybank’ campaign persuaded Barclay’s to withdraw from South Africa – a significant step in ending the apartheid regime there.

This is what I believe in. A general Union, that reaches out and fights across not only universities but different sectors and even borders. The Guild has on occasion been this kind of Union, and it is moving in that direction again now.

However this divide in the union is limited because it’s only one split in terms of what the Guild is to different people.

To explain what I mean by this in the “student union” listen to these two sound bytes from two awful politicians . The two approaches advocated by Obama and Nixon are a common disagreement as to what the Guild does. Is the Guild their to push the desires of the “Silent Majority,” or is it a place where those who want change can be one voice that changes room, a place where a minority can make an argument and win?

So there are two sets of democratic structures we see competing in our student unions. One are the structures where active students come together to listen, debate and possibly change their minds. Meetings like Guild Council full of elected representatives or General Meetings act as the thinking head of student body, responsive to change and arguments. Acting not on quantity of people who believe in something but the quality of their arguments.  It’s through chambers like this that Unions adopted policy that was a minority viewpoint amongst the student body at the time.  Rights for women, end to racist discrimination, LGBTQ liberation and access to education for all regardless of wealth. Unions with decision making structures based thought are the unions that are designed to empower which give a platform for important ideas and it is the union we need if we are going to change society for the better.

However, you’ll notice on all the Guild’s promotional material that we claim to represent “ALL 28,000 students at the university”. This is what Stalinist unions in places like China and North Korea do, they represent EVERYONE, membership is automatic. In a workers’ state you don’t need unions to act as agents of social change as all the battles have already been won, you just need a organisation that is part of a system of checks and balances to ensure that the utopian status quo is maintained. A conservative vision of a union does this. Its representative channels are market surveys, polls engineered and interpreted by individuals who are “politically neutral” like senior management teams. There are 28,000 students on campus, it’s a hell of lot harder under this model to make a argument that can shift the opinions of 28,000 people. Disempowered, isolated minority viewpoints with little means at their disposal for change find it very hard to become majority viewpoints.

This is essentially a battle between the Zombie Unionists Vs  Sentient activists a choice beetween “Zombie student representation” and those of us who like to think about things.  Do you think the Guild represents “ALL students” or are we a group of people who are coming together in a union to improve student welfare for all students?

Zombie unions enforce the status quo of the “majority” opinion, as interpreted by those who control them. The other provides forums and chambers of debate in which the status quo can be challenged and broken.  The Quebecois student unions which are currently organising perhaps the biggest student uprising in recent history are couched in the model of weekly general meetings.

Or to put it in a more visual plot 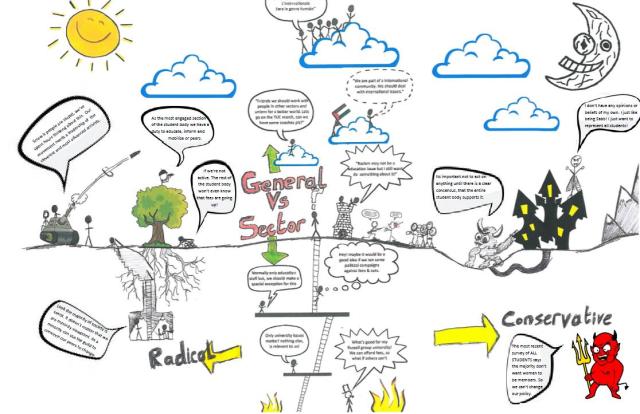 above a bit fuzzy, try the PDF version.

The problem is we have competing visions of the Union we need, but we are all forced into one organisation. Under normal conditions we would set up different unions however the 1994 Education Act means that the university gives all the money and at the same time legitimacy automatically to one organisation, which makes setting up alternatives almost impossible. As we are all stuck under one roof we have to deal with the fact that people are going to have different theories as to how we should deal with this problem.

The only real solutions to these internal contradictions in our union is that we have to try and win the argument and create a unified vision. The student movement in the past has created a vision of society that is in great need of deep and fundamental changes. We have an increasingly unequal society today ridden with racism, sexism, homophobia and ableism a society that exploits the many for the benefit of the few. We need a union that can struggle to change it.  We need a union fit for this purpose.

This entry was posted in Uncategorized. Bookmark the permalink.